Byzantine and Islamic architecture can be seen as really similar because it is known that they both had that creative design of the mosque. But when looked at closely in detail, you will be able to distinguish a difference between the two. The 2 examples I will be using are the Hagia Sophia and the Dome of the Rock. 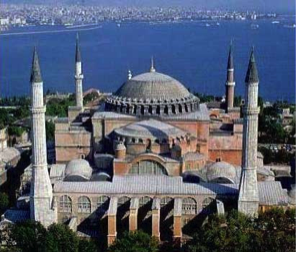 The Hagia Sophia was born from rioters that were trying to overthrow Justinian in the Ancient Islamic Empire. The rioters were angry so they torched the original Hagia Sophia, which was just a church, and built a new Hagia Sophia. One of the writers who lived in the cathedral, Paul the Silentiary, said that after the building was complete, it represented both Justinian and Christianity. The crown of the ginormous done, which was built by Anthemius and Isidore the elder, was 180 feet above the floor. The dome was held up by four strong pillars, which provided the support it needed to sustain the weight. Below the dome, 40 windows are used for lighting to light up the mosaics painted throughout the walls.  The paintings and mosaics are very similar in the Dome of the Rock.

Dome of the Rock 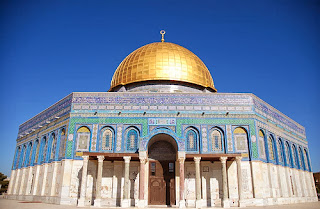 According to domeoftherock.net, the Dome of the Rock is where Muhammad has believed to ascend from heaven. Unlike the rectangular shape of the dome on the Hagia Sophia, the Dome of the Rock has an octagonal shaped dome. The passage says that 12 marble columns hold it up. At the top of the dome, they’re 16 stained glass windows to illuminate the inside of the building. Throughout the dome they’re many mosaics painted on the walls inside as well as out. It was built in 691 AD. The structure of the dome may look the same as the Hagia Sophia but they are also very different.