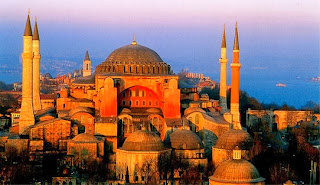 The Hagia Sophia is a church built during the Byzantine empire. An article from PBS  states that the church was, by far, the biggest accomplishment built by the Byzantines. Completed in 537, the dome itself only took almost 6 years to build, with over 10,000 workers. It was the first dome built on a square base. The architect of the dome, Arthemius built 4 columns, with arches on top of them. He then filled them in, forming a strong structure for a dome. Sadly, in 559, there was an earthquake. The dome tumbled down and they rebuilt from the outside in, after turning it into a mosque. 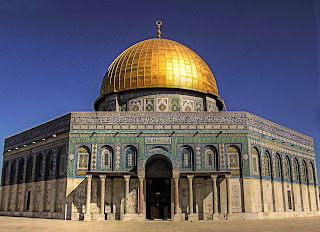 The Dome of the Rock, built in Jerusalem in 688, is the most famous Islamic site in the world. An article on sacred destinations states the Dome of Rock isn’t a mosque, but instead a Muslim Shrine for pilgrims. Tradition says the Dome of Rock was built as a symbol of Muhammad ascending to heaven while he was in Jerusalem. However, some people believe Abd al-Malik built the dome to compete with churches of Christendom.