Islamic and Byzantine clothing were similar in some cases, but for the most part they were very different. My first artifact is a piece of fabric that was used to make clothes in the Islamic empire. My second artifact is a tunic that was worn in the Byzantine empire. Clothing in the Byzantine empire was very similar to that of the Roman empire. The two empires had many similarities, but these articles of clothing are very different from each other. 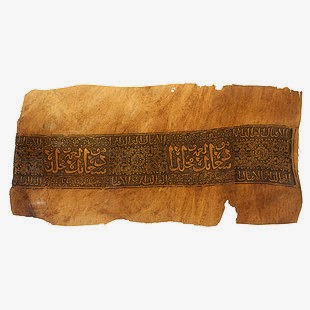 According to the MIT History Department, this particular piece of cloth was used for many things. It was used for sails on ships, rope, and of coarse clothing. The fabric was very rough, but extremely strong and lasting. But with use, the linen it was made from became soft and nice to wear. The soften cloth was common among the upper class, but people with less money could still buy it unsoftened for much less. This of coarse meant the buyers would have to soften the fabric themselves which took much effort and time. Most of the time the linen was made of flax, and took lots of effort to make, and again even more to soften. Also, linen was most likely the first spun fiber.

It is said on the Romanesque/Byzantine website that this Byzantine tunic is very similar to Roman clothing. The main differences between the Byzantine and Roman is in the accessories like headdress, decoration of the clothing, and sometimes the length. This tunic is said to be like the Roman tunica manicata. It was made for comfort, with features like larger head slits to get the item on more easily. Also, the shoulders and arm pieces of the tunic are actually part of the garment, not separate.


I.          I. Body Paragraph Islamic Clothing
a.      What clothing meant
i.     People could tell if the wearer was a Muslim or a “non-believer” by the type of clothes they wore.
ii.     They could also tell the gender and social status or the wearer.
b.      Clothing rules with religion
i.     As much skin as possible had to be covered
ii.     Some sort of scarf or headdress was needed to be worn
iii.     The strictness of these rules varied based on location and time period
c.      Typical Clothing
i.     Men and women both wore tunics.
ii.     There were also wrapped clothes, which were a long piece of fabric that was wrapped around a person, there was no sewing needed.
1.      These were mainly worn by Muslims going on the pilgrimage to Mecca because they were lose, airy, and protected the wearer from the sun which was good in the hot climate.
iii.     Necklines, scarves, and other accessories were often embroidered with silk.
II.          II. Body Paragraph Byzantine Clothing
a.      No clothing rules with religion
i.     Unlike in Islam, the Byzantines didn’t have any formal rules about dress pertaining to religion.
1.      It was frowned upon to show too much skin, so the clothing was always modest, but there were no real laws about it when it came to the church.
b.      Hair Styles
i.     Because it was not needed to cover hair like in the Islamic empire, there were many different fashionable hairstyles.
1.      Men either wore their hair in a bob or long
2.      Women wore their hair up in fancy up-dos.
a.      Some wore turbans like Muslim women, but they would always keep their hair up. Muslim women grew their hair out and left it in long braids.
III.          III. Conclusion
a.      The Islamic and Byzantine empires had very different takes on clothing, and style in general. Most of it had to do with religion, but some were based simply on climate and need. Like the wrap around cloths that Muslims wore for their pilgrimage. The empires adapted their clothing as they needed, and they adapted differently.