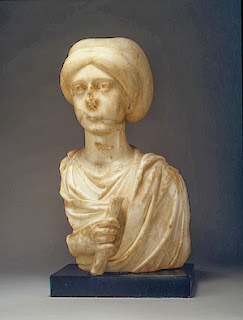 Women in the Islamic Empire and Byzantine Empire both had a little more freedom then in other parts of the world during this time. Women were taught to have freedom but still be obedient to men. The Portrait Bust of a Woman with a Scroll is an artifact from the Byzantine Empire that shows women have intelligence. In Eva March Tappan’s translation of a letter about her visit to the wife of Suleiman the Magnificent in 1550, showed how some women in the Islamic Empire lived in luxury.

The Portrait Bust of a Woman with a Scroll was sculpted in a late 4th century-early 5th century in the Byzantine Empire. This bust shows a woman in very deep thought. The scroll she is holding represents intelligence. It is thought that the bust was made in Constantinople because of its fragility. It might be a memorial to an important person in the imperial aristocracy. The bust shows that she has pride within her intelligence with her long fingers holding the scroll.

Eva March Tappan translates in The World's Story: A History of the World in Story, Song, and Art, about a visit to the Wife of Suleiman the Magnificent in 1550. When the visitor entered Sultana Asseki’s home the visitor saw men in beautiful clothing and holding swords. She was led through the home by an old woman in nice clothes and some young girls. She saw beautiful artwork on the walls. The Sultana Asseki had many female slaves. When she reached the Sultana, she saw her being treated by many slaves, some were even fanning her.  The visitor was asked questions about her country and religion. The visitor answered the questions very carefully. After the questions, dancing girls and music were shown. Everything she served me was served on solid gold. When she left, she was escorted about by the same women that led her in.