Art of the Byzantine Empire and Islamic Civilization 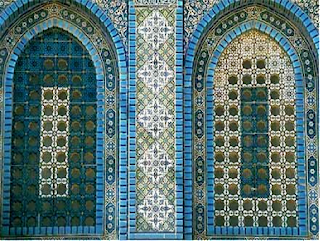 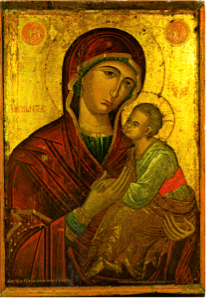 This is Mary and Jesus and the circle around their head represents a heavenly glow. This is from the Toplou Monastery in Crete. 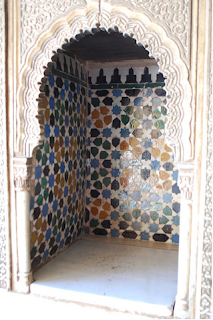 In Islamic cultures you are not allowed to paint any person because they are iconoclastic, which means they ban all images of religious figures. So they use geometrical designs and patterns in their art to convey a message. Islamic art avoids replicating nature, so the only way to understand God’s creation is to study it. In this piece of art they used an eight or ten-pointed star in the middle of the piece and looks as it is spreading throughout the rest of the artwork. It is trying to show that everyone is a part of a complex interrelationship, which only God could create.

1)   Geometry was a commonly used component in both Byzantine and Islamic artwork.
a)   While Islamic tile work is in geometric shapes in nature, the Byzantine mosaics were very colorful.
b)   In Each geometric shape represented religious themes.
i)      Geometric shapes are domes to represent heaven and a cross to symbolize the christen faith
ii)   Byzantine geometric patterns of crosses or domes represent Christ or a heavenly glow.
c)    Islamic by contrast only represents the inter-relationship of things, never directly           copying any living things.
i)     They do this because they are iconoclastic and that means that they do not allow any pictures of living beings, and they do this because of concern that the art will be worshiped instead of the actual thing.
2)   Both the Byzantine and Islamic were iconoclastic cultures.
a)   The Byzantine iconoclastic cultures were limited to Emperor Leo’s reign from around the 8th to 9th century.
i)     During this time many artifacts were destroyed because they were allowed to have any pictures of living beings, also the use of mosaics grew.
b)   Islamic art has consistently followed this subject line.
i)     The only exception is with flowers.
(1)While flowers are living things, they are not beings.
(2)Flowers are also depicted with symmetry, which corresponds to the geometric focus.
3)   Another similarly of the art of Byzantine and Islamic is in the religious applications.
a)   Byzantine art decorated the places of worship
i)     Byzantine art was often used in biblical scenes in their subject matter, like Mary and Jesus.
b)   Islamic art was had a lot of rules put on it because of religion.
i)     They had rules put on there art because they were iconoclastic
c)    While their religions were very different their art reflected either the direct    representation of religious figures or the relationship of their religious ideas.