Architecture: Dome of the Rock vs. Hagia Sophia

Architecture in the Byzantine Empire is remarkably different than Islamic Architecture. Many different aspects of their cultures influence the designs and structure. These differences can be seen in a contrast between the Hagia Sophia and The Dome of The Rock. The influence religion has on architecture in the Byzantine Empire and the Islamic is seen primarily through the designs on the interior of the two different structures.

Dome of The Rock: 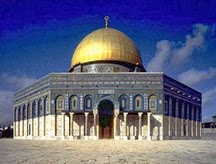 The Dome of Rock has a very large egg shaped dome that is primarily made of a gold colored material. The building is octagonal and has very detailed designs around the entire exterior. The building seems to have a focus on symmetry and repetition. The color schemes and designs are repeated around the whole building. The designs and shapes are mainly blue, green, and yellow. The dome has tiles lining it all the way to the point on the top where a small rod sticks out several more feet. The designs on the building look like stained glass windows at a church. 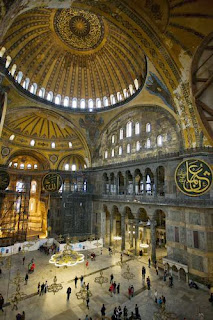 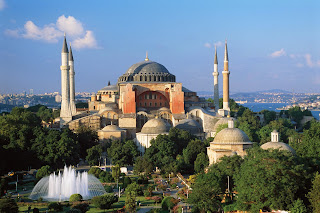 The Hagia Sophia has a rounded dome rather than an egg shaped one. There are four towers with gray colored points on each one. The building has a lot of detail that can be seen when looking at the interior. The interior features many openings allowing for natural lighting. There are many columns and arched openings. The building looks like it was built in many layers, with each growing taller and wider. Many of the arches are either containing more arches or are inside of arches. The dome has small indentions on the base of it.

I. The differences in designs between the two buildings.
A.     Islamic beliefs required that no living beings or Gods were allowed to be illustrated
a.     The Dome of the Rock has more geometric shapes and designs because they can’t have any living beings.
b.     The Hagia Sophia is lined with mosaics of people.
B.     The Byzantine Empire’s architects focused on Christianity in their buildings and created holy places.
a.     The Hagia Sophia means holy wisdom and is now a museum as it was the ideal church of the Byzantine Empire.
b.     The Islamic architects couldn’t display any living beings or Gods because the Qur’an said it was not allowed. Instead they would line the interior with designs.
II. The Byzantine Empire was considered one of the three major architectural        forces during this time period.
A.     In 476 A.D. the Roman Empire split into the Western and Eastern Empires.
a.     The Western Empire fell, but the Eastern Empire preserved the roman culture and continued the architectural success.
b.     In Constantinople, the capital of the Byzantine Empire, the Hagia Sophia was built.
i.     This is the example for how other religious buildings are to be structured.
B.     Leading the way, the Byzantine Empire passed on the idea of a dome to Islam.
a.     The dome can be popularly seen on the Dome of The Rock, which is Islamic but was influenced by the Byzantine’s.
b.     The dome was referred to as the “Onion Dome” or the “Persian Dome”
III. Islam architecture was heavily influenced by the Byzantine Empire.
A.     The Dome of the Rock has Grecian-style columns, which was common in Byzantine Christian churches.
B.     Islamic architects began to make mosques, their places of worship, to better accommodate their beliefs.
a.     The mosques were modeled after the Great Mosque in Damascus.
i.     They would contain a court in the middle and be entered from three of the sides.
ii.     The mosques wouldn’t have anything on the fourth wall but a prayer niche. This identified the east because they always prayed to Mecca, located in the east.
b.     Variations of this general mosque setup became more common as time passed.
i.     Some architects preferred to have a central dome that are rigid on the outside but smooth and lined with geometric figures and designs lake stalactites.
IV. The influences that the Byzantine Empire had on the Islam Empires architecture was tremendous.
A. There are many differences and similarities between the two styles of architecture.
B. Without these two empires designs and ideas, architecture would not be how it is today.