INTRO: Throughout history many empires have been strongly influenced by the culture inside of them. Music plays a large role in it. This will be comparing the music of the Islamic and Byzantine Empire. The evidence is shown in artwork of people playing music to show that music strongly affected the culture. 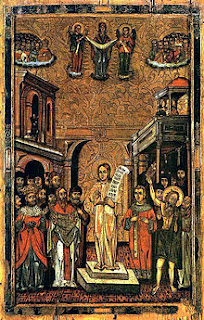 I: Music was used in many areas in the Byzantine empire. It was used in the religions, and also other roles in the culture This work of art shows Saint Romano the Melodist in a church surrounded by people singing.
1. Music was very influential on the Byzantine religious culture.
A. Churches used the music to sing chants more than actual song, which helped the religion spread with it being easier to remember.
b. The composers normally set the music to a traditional tone instead of writing something new for the chant.
Even though music was very important in the Byzantine Empire, it also played a large role in shaping the Islamic Empire. 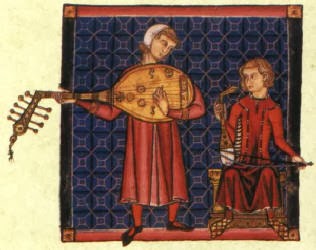 II:  Music was used a large amount of time in the Islamic Religion and culture. Even though some say it isn’t, music is used in the Islamic religion. This artwork shows two people each playing a Oud, which is used all over the middle east.
1. The Oud was used all over the Middle East and helped shape its culture
A.  Other instruments were also used in the Islamic empire. Some were things such as drums, string instruments, flutes, and horns.
2. Music was used widely in the Islamic religion.
A. They used music in in things like a child being born, a marriage, and any festival. Instead of singing like some religions, the Islamic people prayed to the music in its tone and rhythm.
Like it was in the Islamic and Byzantine Empire, music has affected the culture of many other locations.