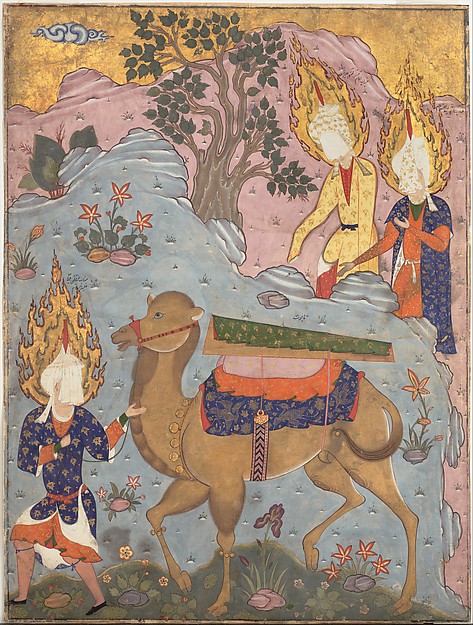 The funerary rituals and art were very important to two very distinct empires in the early middle ages, the Byzantine and Islamic Empire. My first primary source for the Byzantine Empire is a marble sarcophagus that the early Byzantines used to bury their dead. According to the Metropolitan Museum of Art the sarcophagus contains depictions of the early life of Saint Peter and Christ.  On the right side of the sarcophagus there are depictions of the scenes of life of Christ, the Entry into Jerusalem, the Multiplication of the Loaves, and the Raising of Lazarus. On the left side of the sarcophagus it portrays the legend of St. Peters, first his being arrested by Roman soldiers and then him in jail drawing water from a rock.  According to the Metropolitan Museum of Art the second artifact is a painting that depicts the legend of Ali’s burial, in it Ali’s sons, Hasan and Husain, are behind the camel carrying the casket while Ali himself leads the camel. The Islamic method and rituals of death have many contrasting elements opposing the Byzantine culture such as the directness of the Islamic rituals versus the broader rituals and traditions of the Byzantine Empire.
According to the Metropolitan Museum of Art sarcophagi were first used in Roman culture in the early 2nd century, however, the Greeks and Etruscans were the primary sarcophagus builders and users and before the 2nd century Romans used cremation instead of a sarcophagus.  Before Rome split in to Eastern and Western Rome their main system of religion was Greek they would portray myths carved into the stone, wood or marble depending on how rich they were. In Roman society decorated marble sarcophagi were considered more lavish and were reserved for the elite, while the lower classes would only be able to afford maybe a stone or wood undecorated sarcophagus. Increasingly common later on in Christian funerals was a niche tomb which was an empty decorated sarcophagus that would be placed next to or built into the wall of a church while the actual body would be buried beneath the church. According to Qantary-Med, the Eastern Orthodox religion of the Byzantine Empire has more traditions than really rules, one of their traditions is to wash the body in order to “purify” it another is to shroud the body in a linen cloth and point it towards the door. The Byzantine Christians saw death more as a very slow process, for example it was tradition to visit the grave site multiple times after their death, this is seen as the body slowly passing away from life to death. There are some stricter traditions such as during the funeral the traditional food must be kollyva which is a traditional food that is eaten during the funeral.
According to Mission Islam the Islamic or Muslim death rites have multitude of rules and regulations that must be followed. One of the main rule in the Muslim community is there is no open show of grief over a death of someone, for example there should be no wailing or beating of the chest the only sign of grief should be crying. This is probably because in the Muslim faith they believe that the spirit has gone to a better place so there should not be any open sign of grief, also they believe that the spirit can hear you so there should not be any sign of open grief besides crying. Another one of the broader rules is that all Muslims should be buried in the ground if possible, during the Ancient Islamic empire there were ships and if a Muslim was to die at sea they would have to either wait until they reach land to bury him or attach weights to the coffin and drop it overboard. The Muslim faith, and therefore most of the Islamic empire, used the actions and teaching of Muhammad to create the rules of Muhammad which is why their rules are very strict and precise. For example one very strict rule for burying the body that Al-Islam states is the recommendation that the grave be rectangular and the one who lays the body should be clean and bare-footed and enter the grave from the feet side.  Another very specific funeral ritual stated by Mission Islam is if a relative or friend has died one must pay off their debts, this rule started when Muhammad instructed a grieving relative of a man to pay the two dinars he owed, because the prophet said this it has become a rule. Contradictory with the painting, not all Muslims actually had a coffin, instead they would just be wrapped in a shroud and placed in a grave, this corresponds with the Muslim belief that all burial should be in the ground.

Outline
1)      Islamic(Muslim) culture was much more strict with funeral rites and practices
a)      Time of Funeral
i)        For example when one believes they are dying they must repeat a special type of prayer
ii)       In the Christian Byzantine empire on the other hand the funeral started after this person has died
b)   Closing of Eyes
i)        Another is that in Islam one must close the eyes because sight leaves after death
ii)       In Eastern Orthodox there is no mention of closing the eyes but it is traditionally done, the contrasting element is that it is a rule in the Muslim faith while in the Easter Orthodox faith it is simply tradition to do so
c)       Shroud
i)        In Islam the body has to be wrapped in a white shroud and should be wrapped an odd number of times
ii)       In the Eastern Orthodox faith people are actually required to be wrapped in a linen shroud
d)       Debt Paying
i)        In Islam the Prophet himself said that if you are in close relation with the person who has died you must  pay off his debt
ii)       In Eastern Orthodox there is no such rule
2)      Islamic culture there is no open grief
a)      Shrieking
i)        In Islam no open shrieks or wailing of the person
ii)       In Eastern Orthodox some people will mutilate themselves

b)      Graveyard Visiting
i)        In the Muslim faith there are strict rules of even visiting the graveyard, before Muhammad said they could, some women were not even allowed in the graveyard
(1)    Even when in graveyard one should not show open grief ex. Wailing or shaving of the head.
ii)       In Eastern Orthodox faith anyone can visit the graveyards and there are many displays of open grief even after someone’s passing from years ago.

Conclusion Sentence
The ancient civilizations of both the Islamic and Byzantine Empire have many contrasting elements, this is because of their differences of religion and of their personal beliefs and morals.

Posted by Neelesh Manandhar at 10:32 AM